Cryptosomniac Twitter 11.5k
0
Latest News
>>> Binance has just announced they are to delist BSV on Monday, April 22nd, at 10AM London time. Binance said: “At Binance, we periodically review each digital asset we list to ensure that it continues…      >>> By Liquid Head of North America Nick Chong and Cointelligence Chief Strategy Officer Hosam Mazawi The prospect of cryptocurrency and blockchain technology fueling the move to a trustless economy has a…      >>> QuidaxBlockedUnblockFollowFollowing Apr 15 It’s pretty easy to get lost in the maze of buzzwords and technical terms surrounding cryptocurrencies. Often times, such words get lost in translation even…      >>>

The Horizen team announced today via official press release they're unveiling their flagship multi-function wallet product. Sphere by Horizen promises to be more than just a wallet, however. The app will support additional features i.e. end-to-end encrypted messaging, the ability to run a full node, giving users the option to select between a full or lite client, and the ability to transact privately or transparently peer-to-peer.

Upon installing the wallet users will find the interface familiar, feeling similar the UX design common to many apps and websites. Once one creates a new wallet the user is greeted with a clean display aggregating data from within the ecosystem.

This release gives ZEN token holders a new home to store their tokens, as well as providing a gateway to the entire Horizen ecosystem. The release is available for MacOS, Windows, and Linux desktop operating systems.

Users can restore the wallet via a 24 word seed phrase should they ever lose access to their funds. As always best practices should be used when generating a new wallet and storing the seed phrase. Logging into the wallet displays wallet balances, an assortment of news, tweets, market cap data, info on secure and super nodes, as well as a blockchain explorer.

Big Things on the Horizen

The Horizen team looks to add more powerful features in the coming months to further embellish the wallet. Features slated for future releases include: 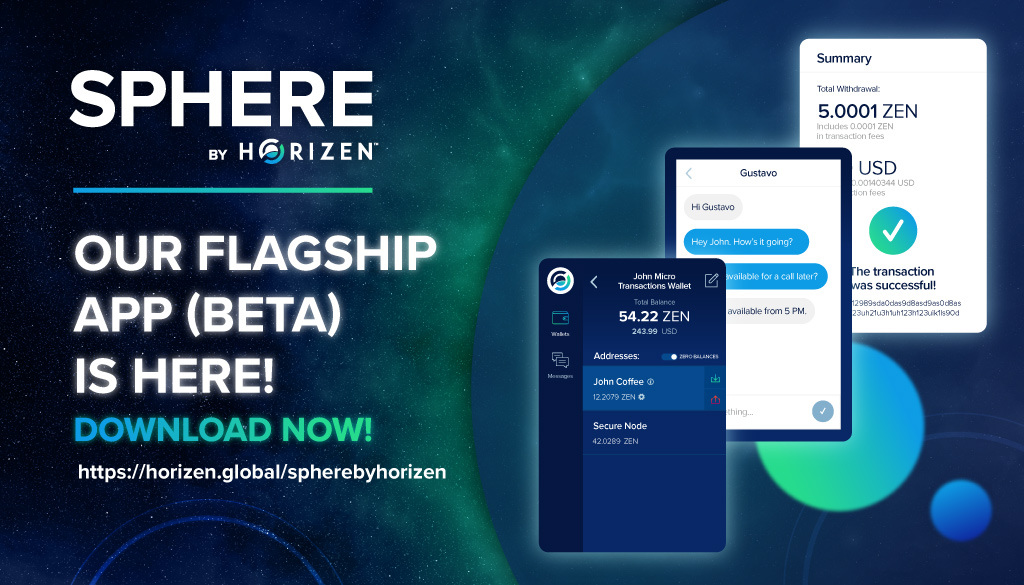 Horizen was re-branded in 2018 after the former incarnation, Zen Cash, suffered a 51% attack in May. The team took action immediately, reaching out to their community to help restore investor confidence. CEO Rob Viglione came on Cryptosomniac for an interview on June 12th of this year and discussed the events that caused the attack, and what they were planning to do to prevent it in the future.

The swift action taken by the team led to significant protocol upgrades, as well as the eventual rebrand to Horizen in September. The team wanted to keep with the Zen branding since the project was originally a fork of Zcash, as well as the inclusion of privacy enabling ZK-Snarks. The ticker remains ZEN on all associated exchanges.

ZEN has followed the general bearish market direction almost all cryptocurrencies have suffered over the course of 2018. However, recent events seem to have helped boost the overall valuation of ZEN in the market. Currently the price is staying above the long term trend line indicated in red. The red trend line acted as resistance up until October 15th, but has acted as a weak support since having been tested on November 24th and again December 7th.

Overall volume remains fairly low, and lower highs have been created on the weekly and the daily, easily visible on the above chart since the double top that printed between Nov 4th & Nov 12th. Daily RSI is trending overbought, price has rejected off the 20 day moving average twice, and Squeeze Momentum shows declining buyer-side momentum, which is confirmed on smaller time frames in the histogram. Based on this data it is possible a further slide may be in store for the near term, barring something like a massive bitcoin breakout creating FOMO. In the event of a breakout significant resistance is likely to be shown near the 1550 satoshi range, and again near 2000, based on previous support levels and common psychological triggers.

Hope on the Horizen

Despite the protracted bear market legitimate cryptocurrency and DLT companies are still making moves, and Horizen is doing their part. With the release of the Sphere application Horizen looks to prove they are dedicated to building their technology and executing their vision.

Horizen plans to offer services such as ZenPub - a way for anyone to publish information online anonymously, ZenHide - a censorship resistant way to browse the web, and Zenchat - a secure way to message, which is available now with the Sphere wallet. It is also notable that Grayscale Investments recently added Horizen to their portfolio of digital assets, being one of the largest DLT investment funds.

Information provided by Cryptosomniac, LLC is not intended to be utilized in making any financial decisions and are not a solicitation, nor recommendation to buy, hold, and/or sell a particular product, digital asset, or ICO. Cryptosomniac, LLC website, newsletter, email communications, and discussion groups/chats should be used at your own risk. Opinions expressed by Cryptosomniac, LLC are based on personal experience and do not claim to guarantee any results, nor do they imply a recommendation. You can access a full review of our disclaimers and terms of services Here:  https://www.cryptosomniac.com/terms-of-services/

SIGN UP FOR OUR NEWSLETTER:
INSTANTLY RECEIVE OUR BITCOIN BEGINNER'S GUIDE!


Help us grow strong!
Tip Us with Cryptocurrency

Scan the QR code or copy the address below into your wallet to send some bitcoin:
[X] Click Here to Hide Donation Details

Scan the QR code or copy the address below into your wallet to send bitcoin:
[X] Click Here to Hide Donation Details

Scan the QR code or copy the address below into your wallet to send some Ether:
[X] Click Here to Hide Donation Details

Scan the QR code or copy the address below into your wallet to send some Litecoin:
[X] Click Here to Hide Donation Details

Scan the QR code or copy the address below into your wallet to send some Monero:
[X] Click Here to Hide Donation Details

Scan the QR code or copy the address below into your wallet to send some ZCash:
[X] Click Here to Hide Donation Details